Under what circumstances are Russian words spelled phonetically in Ukrainian Cyrillic?

I was looking at a primarily Ukrainian language meme account and in one screenshot I saw the word "Прівєт". Is this kind of phonetic transcription common? When is it used?

First, there are many "legitimate" uses for loanwords, especially the proper names like family names, toponyms, etc. For example, the Russian Prime Minister President Prime Minister's family name Rus.Медведев is written Медведєв in Ukrainian, and there are plenty of uses like Мєдвєдєв, which is arguably a better match with the original phonology:

But yes, you've noticed a rather popular phenomenon.

See also Sensational spelling. It has similar effect, but using literate, but rare or dialectal spelling of a word or phrase.

In this particular case, some Ukrainian speaker is ridiculing about someone who speaks Russian or a Surzhyk.

This phenomenon has risen a lot since the times of Russian armed invasion to Ukraine, where one of the Russian self-excuses was "Defending the Russian-speakers" (of Ukraine). In reality, the first thing the occupants have done is they began a forced russification on the occupied territories.

The following photo shows a road sign at the entry to Donets'k city after the forced russification by the occupants; they have removed the "soft sign", and «ДОНЕЦЬК» became «ДОНЕЦК». 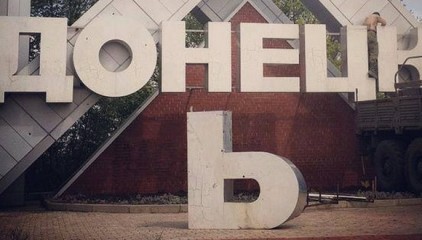 And, most obviously, this forced russification has naturally caused resistance among the Ukrainians, even the Russian-speaking ones. They started mocking the Russian language as in your example.

So, since the phenomenon is not linguistic, but rather political and social, I would not recommend a language learner to use it, unless you know what you are doing.

From the linguistic point, Cacography is a power tool, but also it's like a "thin ice"; it is easy to "slip off" the right track:

Not the answer you're looking for? Browse other questions tagged transliteration or ask your own question.

2
What kind of grammatical errors would I use to make a joke about how I can't speak Ukrainian?