I discovered this song and I'm trying to decipher the meaning:

I found the following definition for скорина:

Does it mean that they turned into balls of hard-crusted substance? What is the meaning of сiли then? "To shrink"? Why is the preposition на used here? It does not mean "upon, on the surface" in this case, does it?

Admittedly, this is one tough question. I had to ask an elder person to understand it even to myself. :-) This phrase can be roughly translated, "lost its shape, flaked".

Гречаники, buckwheat cutlets, are cooked so that they kept their thick shape — primarily because the surface gets crusty first and keeps the shape of each individual cutlet throughout the cooking time. 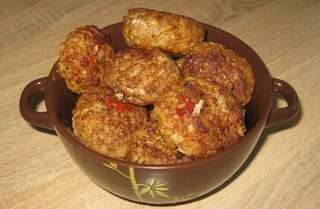 If, however, the dough (or should I call it mince?) was too liquid or the proper cooking temperature was not kept, the cutlets can flake (сісти, "to shrink"), sometimes even merging into a single messy "pancake" underneath. This "pancake" itself becomes a crusty surface (скорина) underneath when cooked.

This is why the lyrics says,

In other words, the cutlets were unsuccessful because it lost its shape and it formed a crusty "pancake" underneath.

The picture below does not show unsuccessful гречаники; it shows гречаники under sour cream sauce, but it demonstrates the flake underneath: 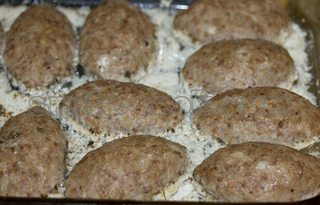 Not the answer you're looking for? Browse other questions tagged значення-слів or ask your own question.