What are the types of "Ge"-sounds in the East Slavic languages?

I hope such "barbaric" description of sounds is understandable. Ideally, the answer should use and explain all kinds of Ge through the International Phonetic Alphabet.

This question comes from a wrong assumption that these consonants are similar. The seemingly similar Cyrillic letters Г and Ґ are the ones to blame.

The reality is quite different.

First off, as a general rule, the spoken language is always the key, and the writing only "encodes" the real, actual sounds of each particular language. It is a good idea to keep in mind that the writing can spoil the entire picture. Take the vowel о. Ukrainian о is almost always different to the Russian counterpart, despite the fact is "encoded" with the same symbol.

Leave alone the fact that even within the same language it can be tricky: there are three different vowels in Russian word молоко [mə lɐ 'kɔ] (or even five if you consider the dialectal [mə ɫʌ 'ko]), for example — all five "encoded" with о.

So they belong to three different classes, having very few in similar.

This image shows (pretty schematic) the location of glottis and velum: 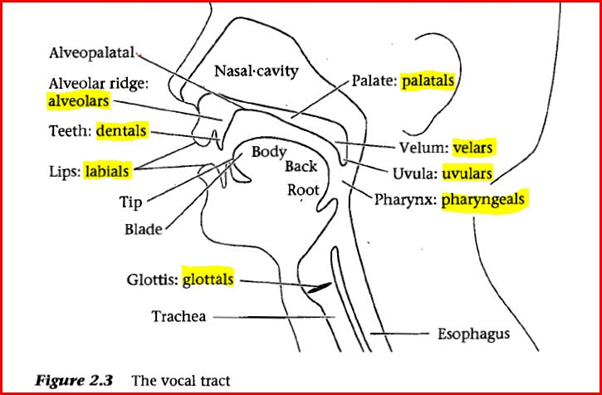 This also implies the answer to te question,

Does this list describe all types of "Г"-sounds in Eastern Slavic languages?

The answer is, there is no such thing as "Г"-sounds. One may or may not consider various consonants a "Г"-sound or not, depending on many factors. Take the following examples:

See, if we replace the term of "Г"-sounds with something more formal (e.g., "glottal" or "fricative"), we automatically get the full list of languages having this phoneme, regardless of how they are written.

Yet another consideration is for mapping phones to phonemes. Each phoneme may be pronounced differently by different speakers (in other words, they produce different phones), but a listener would map these phones to the same phoneme to decipher the word.

16
Is there a significant sound difference between Й and Ь?
12
What is the proper Ukrainian pronunciation of 'Київ', 'Харків', 'Львів'?
5
Does the letter "т" in Russian tend to be "ч" in its Ukrainian parallel?
8
What are the major pronunciation mistakes of Italians speaking Ukrainian?